Homepage > Monroy Back in Action. Another Triathlon, Another Overall Win.

Monroy Back in Action. Another Triathlon, Another Overall Win.

Impressive finish for Monroy at today's LA Triathlon (Olympic distance).  First place overall female by 4 minutes against the elite (amateur) and amateur field.  Second overall win of the month.  She blows away her old personal course record by 10 minutes.  Appears that Megan is back on course, racing triathlons, and doing so with that oh-so-familiar smile on her face come rain or shine...

After talking with Little Miss Mega Meg,  I have confirmed that the apple doesn't fall too far from the tree, and that she rather ramble on about the stories behind the scenes...

Her Dad entered the race as well (sprint distance), and after telling him she would lend her only other (alumimun) road bike to him so he would go faster than the old mountain bike he was going to use.  He lands a 3rd place AG finish.  His second transition blew hers away by a whopping 30 seconds, but recently came to realize the reason why was because he had no shoe change.  Before the race, Megan had changed the bike pedals and put cages on them for her Dad to ride in his running shoes.

Megan says regarding the race- "Woke up this morning still not feeling too prime and told myself, 'suppose I will race today but don't think it's the wisest decision for my body.'  I'm dealing with a cold that threw me to my bed feeling terrible all day yesterday.  I raced and somehow survived, and crossed the finish with a smile and no voice.   I definitely felt a lack of power while racing but  I saw my Dad on the run leg of the race much farther up the road than we had predicted which totally fired me up even more to push through to the finish in smiles.  I'm sorry to my buddies I saw out on the course; I'd usually yell out 'good job' or something along those lines.  I just simply had no voice.  Right now my voice is back and  I'm feeling fine, thinking that race kicked the majority of my cold out of my system, but that is what a good night of sleep is for too!  Ahhhhh...."

Check out results here: LA Triathlon Results.  You will find her results on the second page, 13th amongst the stacked field of professional women. 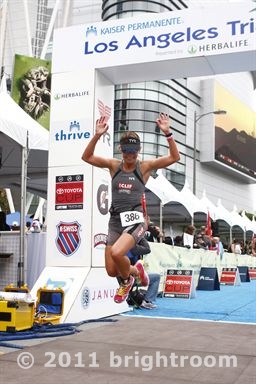